More and more people have been replacing traditional cow’s milk with plant-based ones in the last few years, almond milk being among the top preferences. The reasons for this trend are simple.

People either choose to keep a vegan diet or have developed lactose intolerance and simply can’t consume any animal milk. [1]

In this article, you will be able to read everything there is to know about almond milk, including the details about this ailment going bad. But first of all, let’s understand exactly what almond milk is and the benefits of consuming it.

What is Almond Milk?

As its name implies, almond milk is made strictly from, well, almonds to which you add water. To prepare a batch, all you have to do is blend the almonds and the water. Finally, strain and remove the pulp to get a beautiful white and smooth liquid.[2]

You can check the video below to understand exactly the process:

There are cases when you don’t have time or simply are not in the mood of preparing your own but still want a traditional milk substitute. If so, you can purchase one online or from any supermarket.

Personal Opinion: Even though you can find almond milk that has been sweetened or has some extra flavors such as vanilla, I do prefer an organic, unsweetened version like this one.

Check the Latest Price on Amazon
Go to top

The Benefits of Consuming Almond Milk 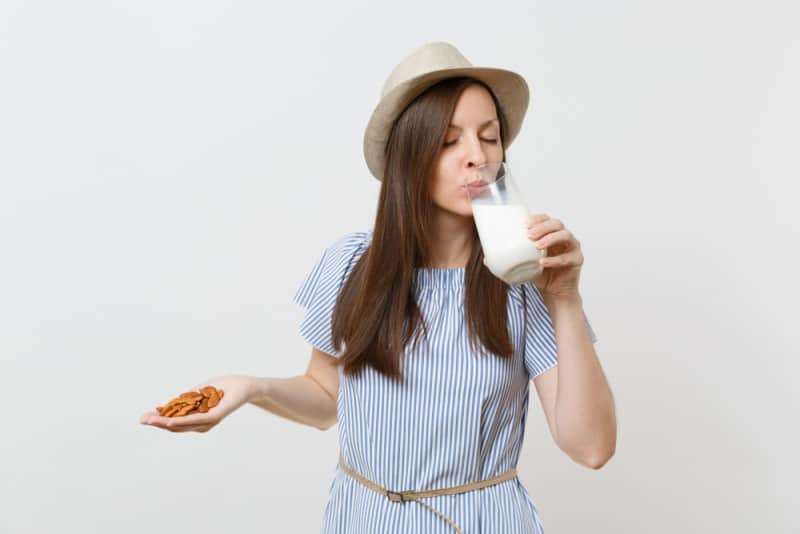 Before moving on to the actual benefits, you should know that a cup of almond milk contains only 39 calories, making it a perfect alternative for people who are on a diet. [3]

However, more important benefits come from consuming almond milk than keeping your calories at a low level.

Believe it or not, almond milk offers 24% of the daily value for calcium intake. [4]

More so, a cup of almond milk is high in vitamin E. This vitamin is very important because it is a fat-soluble one, meaning that it has the power to protect the human cell from the damage free radicals can make. [5]

Furthermore, it brings many benefits to your skin and eyes.

Unfortunately, almond milk will not offer you the protein intake your body needs. A cup of almond milk contains only 1 gram of protein. That is a very low amount if compared to the cow’s milk which will give you 7 grams of protein per cup.

Warning: Just as people having lactose-intolerance issues, there are also people who have nut allergies. These people should not consume almond milk as it might cause some undesirable effects.

Can Almond Milk Get Spoiled 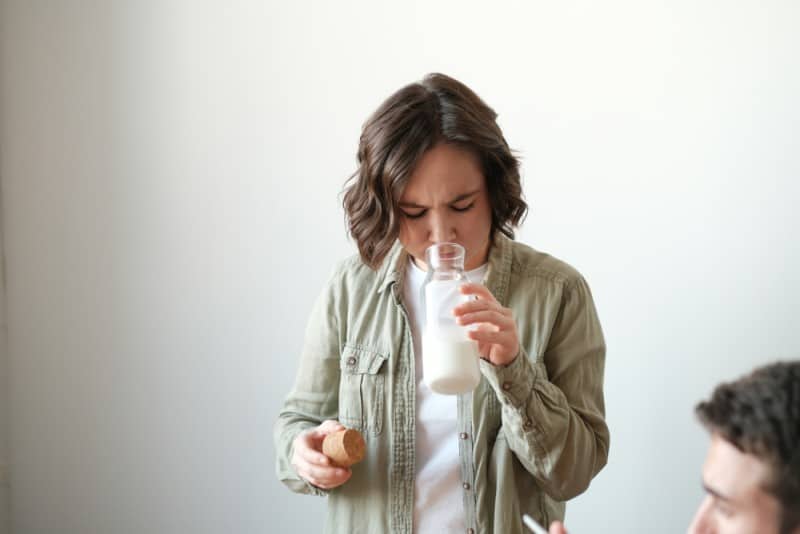 The first thing I want to clarify is that, yes, almond milk should be consumed within a given time.

If you look at any store-bought almond milk, you will notice that the containers are marked with a ‘best before’ date. This date is merely an estimation of how long the product will last before getting spoiled.

Even though it is a matter of pasteurization and each brand has its own technological process, don’t expect the almond milk you buy from the supermarket to last more than one month.

I am sure that you might ask yourself the next question: how long can you keep a carton or jar of almond milk after opening it?

Well, there’s no exact period of time, but you should not keep your store-bought almond milk for more than 7-10 days if opened. However, the artisan version, such as the one home made would only last 3-4 days.

Can you Tell if the Almond Milk Has Gone Bad?

There is more than one signal that will let you know your almond milk is not suited to be consumed.

The first sign of the almond milk being spoiled is the funky smell. There is not an actual word to describe that fragrance, but trust me that you will notice it.

The thing you should look at is the milk’s aspect. If spoiled, the almond milk will get thick and will clump a little.

Finally, if none of these signs are available, the taste won’t lie. If you feel any sour feeling when tasting the milk, you should toss it and buy or prepare a new batch.

How to Proper Store Almond Milk

The final part of today’s discussion is how to store your almond milk so you could keep it fresh for a longer time. Unfortunately, if left at room temperature, the almond milk won’t survive for more than a couple of hours.

This is why you should store the opened bottles, the homemade almond milk, and the refrigerated ones in your refrigerator.

This, of course, doesn’t apply to unopened cartons that are shelf-stable. You can store the unrefrigerated brands in dark places such as a pantry.

You can even leave the unopened carton in your kitchen as long as you don’t keep it into direct heat. But as soon as you open your milk, you will need to transfer it to the fridge.

Personal Opinion: You might not know what kind of almond milk you have purchased. I suggest you store it directly in your fridge just to be 100% sure that you don’t spoil your milk before opening it.

Some of you might wonder if you could freeze almond milk like you would cow milk. Well, unfortunately, not really. Freezing it will change its texture and would not be very pleasant to be consumed afterward.

However, suppose you have some leftover milk that you intend to use only for baking purposes. In that case, you can use the freezing technique. The texture won’t affect your delicious baked goods.

As you can see, even if it is a plant-based ingredient, almond milk can still go bad. The secret is to know how to store and consume it, as discussed in this article.